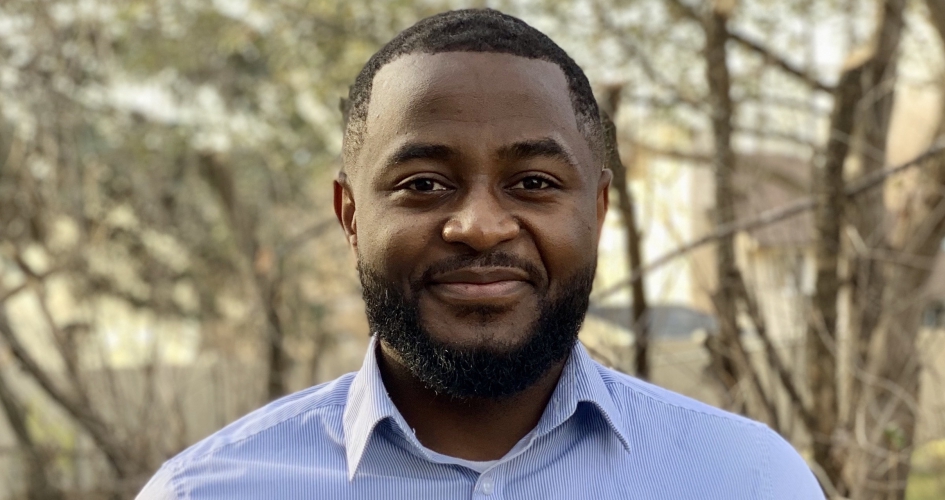 Alain Njipwo, is a former NHCC student, who transferred to a four-year institution and went on to get his bachelor’s degree in engineering. Today he is pursuing his education even farther and will be attending graduate school in 2021. Alain is passionate about the STEM field and believes that with a little persistence, anyone can do it.

What made you want to enroll at NHCC?

“When I was a senior in high school, I was playing soccer competitively and I had the goal of going professional. Although I loved soccer, I didn’t wanna put all of my eggs in one basket and focus too much on a soccer career. I had an interest in engineering and I knew I couldn't do both professional soccer and school. The next thing that I thought about was finances. I looked at different schools to see what made the most sense and I found North Hennepin. (It also helped that both of my sisters went to NHCC, before transferring to the University of Minnesota). That was basically my thinking behind why I came to NHCC as a freshman.”

How did you decide to major in engineering?

“As a person, I’ve just always been curious. Before going into the professional world, I was already teaching myself programming. In 10th grade I started learning HTML and CSS web development.”

Did you have any internships early on?

“When I was a senior in high-school I had a year-long IT internship and during my freshman year of college, I also had an internship. The internship I had in college focused on software engineering. Myself and the other interns would monitor and do internal user support. The company I interned for had a bunch of production plans and we saw a lot of real-live production numbers. If something looked off, or was escalating, we had to call different teams and say, ‘hey, this is a potential problem, we're seeing a slowdown here.’ We made sure that the production was smooth. By the end of my internships, I was already well on the way to starting my career.”

How long were you a student at North Hennepin?

“I went to school there for three years, starting in 2014. The reason my first year took me so long, was because I was working part-time and also playing competitive soccer. I wasn't as focused as I could have been during that time. During my first semester I took pre-calculus, philosophy and a history class… I think I was taking around 13 credits, while I was getting my bearings. Eventually, I told myself that I could focus on soccer once I had my bachelor’s degree. In the fall of 2017, I started school at Iowa State.”

How was your experience at NHCC?

“First of all, the quality of education at North Hennepin is amazing. The thing is, you don’t really realize what you have until it’s gone. The professors at NHCC are so dedicated to their work. Deane Newborg was one of my math teachers and one of my favorite teachers at NHCC. I loved how she simplified things. As a teacher and as a person, she is absolutely amazing. When I took Calculus 1 at NHCC, that is when I first met her. Deane’s teaching, the way she presents the material and the way she challenges students to remember it, is fantastic. Through her daily quizzes and homework assignments, one of the things that stood out, was how much out of her way she’s willing to go, to make sure that every single person in the class understands it. When I was in her class, I was interning and coaching high-school soccer. I had a lot going on, so, I wasn’t necessarily putting in as much time as I needed, to make sure I was on top of things. I was relying a lot on Deane and Dale from the math help center, during that time. I would tell them, what made sense and what didn’t. Even if I needed to go over it, two, three, four times, she would help me and explain it in different ways. We spent a lot of time together and that is how I got to know her better. I’ve kept in touch with her over the years. When I was about to transfer, I shared my future plans with her. We talked together about her education past. What lead her to become a math teacher and to have that impact in the STEM field. When you advance in math courses, the class sizes become smaller. I really got that one on one interaction with her. We were able to build a personal relationship. Once I transferred to Iowa State, I told her and we’ve kept in touch ever since. Recently, I emailed and asked her for a letter of recommendation for graduate school.”

How was the transition from NHCC to Iowa State?

“At first, college at ISU took a bit of adjusting. Going from the largest class size at NHCC being 70-80 students, to 400-500 max students sometimes, was tough. I was used to the personal connection at NHCC and being able to walk up to professors individually with questions. It did get better over time, though. The biggest thing that helped was having my best friend there. We lived together all throughout college and that was nice. Iowa State itself, has a great transfer student program. I felt like I got the hang of things pretty quickly. The transition process isn't as terrible as it can be at other schools.”

What did you get your bachelor’s degree in?

“It is a bachelor of science degree in engineering. Now I am going for a master of science degree in engineering, also from Iowa State. I’m aiming to start my master’s degree in January of 2021. It is very exciting and it is also a lot of work. The biggest thing for me is, when you’re enjoying something, the work seems a little easier. The research in my field is being pushed by companies, for us to learn the latest circuits. The internal research that big companies do, for research and development is very appealing to me. Working in a big company speaks to me more, than working in academia, or teaching.”

Do you have any STEM advice for students who are considering it?

“I know at first it seems a little daunting. When I speak to people who are not engineers, or people who say, ‘oh, I can’t do engineering, because I'm bad at math,’ the first thing I say to them is, even professional mathematicians, who work on math every day, still have trouble. Of course, the first time a person tries something, they'll say, ‘this is hard.’ For example, in classes like precalculus, you ‘ll have to look at concepts multiple times. In my early years at NHCC, a lot of my time was spent getting math support. So, if you ask me, I definitely think people can do STEM. Also, essentially every interest, can be incorporated into engineering. You don't have to do super technical work like I do. If you think about clothing, or the sustainable clothing industry. There are people who figure out what kind of fibers go into clothing. Take Adidas, for example, they might use ocean plastics in their products. Engineers at Adidas integrate the next line, which becomes the next generation of performance. That is all engineering. If you're at all interested in clothing, or fashion, you can definitely do something in the engineering field. It’s a very broad field and there are many problems to solve. I am definitely an advocate for the STEM field. I think the biggest hurdle is just the math side of things. Practice and repetition really help to get through that. I tie that back to playing soccer competitively. The biggest thing we learn as soccer players, is that practice helps you get better at a skill. You need consistency and then you need repetition. Some people, can see a concept once and it makes sense, but other people need to see it a few more times, before it sinks in. If you’re thinking of going into a STEM field, my advice would be, don't give up after the first, or second time, just keep trying.”

Is there anything else that you would like to add?

“One of the things that I think helped me, was knowing that, you won’t always see the big picture. Computer engineering is a mix between software engineering and electrical engineering. That makes computer engineering much more complex. Software engineering by itself is difficult, but the concepts are all related. Some semesters felt like you were having two extremes going against each other and it made it much more complicated. Joining clubs and professional organizations on campus, or in the community was something else that helped me. At ISU, I was a member of the National Society of Black Engineers. Remember, it’s not what you know, but who you know. The last thing I will say is, it’s ok to struggle. As you get closer to the higher-level concepts, I know some of them are absolutely mind blowing. If you don’t do as well, or even fail a class, that is all fine. My undergrad degree took me five and a half years. It all worked out and that is completely fine if it happens to you. I know sometimes we put a lot of pressure on ourselves to achieve goals in a certain time frame. But as long as you’re moving forward and finding fulfillment in yourself, that’s really all that matters in the end.”