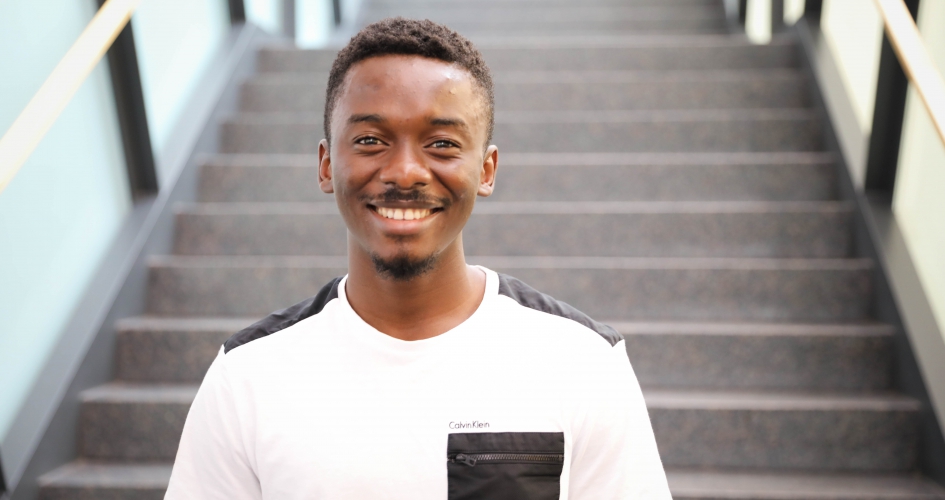 When Afeez Sodeinde came to NHCC in 2015, he originally started as a pre-nursing major. But during his required science courses, he discovered a passion for biology. Early on at NHCC, Afeez met Andrew Arsham, Assistant Professor of Biology at Bemidji State University and Biology Baccalaureate Partnership Director. “Andy showed me this four-year plan and explained, ‘These are the classes you need.’ The graduation path was clear and after I finished my associate of Liberal Arts degree at NHCC, I chose to continue on at BSU.” There, Afeez took advantage of many opportunities, attending conferences and joining a STEM alliance. “I graduated from BSU in May of 2019 with a bachelor’s degree in Biology and after that, I spent two years working at the National Institutes of Health. This fall, I’m going to start graduate school at Yale University.” Learn how NHCC and BSU impacted Afeez’s educational journey in the Q&A below!

What role did North Hennepin and BSU play to help you get to this point?

NHCC and BSU were important in making me the scientist I am today. When I started at NHCC, I had just moved from Nigeria and I wasn’t ready to go to a very big school yet. It was nice to have small classes, where I could directly interact with teachers and also, it didn't feel impossible to know my classmates as well. Because most times when I’m in big classes I'm not even trying to meet my classmates, since there's 1,000 people I could be talking to, usually I just don’t talk to any. But I decided that North Hennepin was the best option as a community college to integrate myself into the American system. It turned out to be a great choice and there were lots of opportunities open to me, even as a community college student. After my first year at NHCC, I worked at Hamline University as a Summer Research Student. That was a steppingstone to other opportunities that came on later. The summer between my North Hennepin and Bemidji State University experience, I was able to work at the Broad Institute in their cancer program, doing more research. So, despite the fact that I went to a community college and a small state school, the opportunities were still there. And I had mentors, Andrew Arsham, Dr. Mans, Paul Melchoir, the list goes on and on. They didn't just let me go at it by myself, they were always willing to help, and look at statements once again and just support me through the process.

Besides your mentors, what else helped you to stay on track during college?

I joined TRIO during my first year of college and TRIO exposed me to such a diverse group of students. It created this camaraderie, knowing that there were other students who faced similar struggles to me. Even students who faced more struggles than me, but were still doing well at school. That was inspiring, you know, I wanted to be like them. TRIO created that interesting perspective. When I started the BSU program, I learned from mentors. Then towards the end of my program, I took it upon myself to make sure I mentored other students. I was able to give back to the community through TRIO Upward Bound and mentor nine high school students from the Brooklyn Park and Brooklyn Center area. I helped them with ACT, SAT and Accuplacer applications. It was challenging for me to see them grow. It’s nice seeing other people grow and it's a more visible audience than when you're looking at yourself. That's definitely one of the inspiring parts about mentoring other people through TRIO.

How was the NHCC and BSU partnership beneficial to you?

The North Hennepin and BSU partnership was really important for my process. If the partnership didn't exist, my process would have looked very different. I'm pretty sure it would’ve taken me longer to graduate and I would’ve been less motivated to try to finish if it took me longer than I expected. During my BSU experience, I actually saw students who were close to graduating and they talked to me about what they had been through. At a community college, you don't see that, unless maybe you know someone, or someone in your family is going through it. For me, that was one of the important things that this partnership created. The BSU partnership, gives NHCC students an advantage over the other community colleges, because they can actually see people in their third year, fourth year and students who are graduating with a bachelor's degree. It's really nice to see. One of the things that we did during that period at NHCC, was create a Biomedical Science Club. It put community college students and university students into the same group. There was a room where people who just started their undergraduate education, could be mentored and inspired by people who were just finishing up.

What was the BSU program like? Were you living in Bemidji, or were you taking classes here?

The BSU program was much more affordable than other schools I was considering and BSU also offered lots of opportunities for me. I joined The North Star STEM Alliance program at the University of Minnesota and Andy supported us in going to different conferences as well. I took BSU classes on North Hennepin’s campus. Initially, I was worried about who the teachers would be and if all of my North Hennepin credits would transfer. (This a problem that many students have when they transfer to a different school, sometimes they have to repeat certain classes). But, because of the NHCC and BSU partnership, it was perfect and I didn’t have to repeat any community college courses. I did a lot of my biology credits before even transferring and once I did transfer, the classes I needed weren’t difficult to take on NHCC’s campus.

How did you spend your time after BSU?

In May of 2019, I graduated from BSU with a bachelor’s degree in Biology. After that, I got an opportunity to work as a Postbaccalaureate Research Fellow in a cell biology lab at the National Institutes of Health, in Maryland. During my two-year post-bac program, I applied to several PhD. programs. I decided the best program I got into was the Yale PhD program and this fall, I’m going to be starting at Yale.

What made you want to go to Yale and what are you going to study?

Because of my experience at North Hennepin, I knew what I was looking for in a school. I knew I wanted to be around a good community of students, that I could easily talk to and were accessible. I also needed a program that was very flexible. Where I could decide if I didn’t want to do the exact training that I started with and change my mind later on. I decided to go to Yale, because it gave me the most options for studying Principle Investigative Science. My program is also an umbrella program and there are multiple special focuses possible. Virology, immunology and cell biology for example. As of now, I think I want to do virology. As a graduate student, I’m still a little bit open minded about my options. It’s nice to have a program that allows you to be flexible. That’s the main reason I decided to go to Yale.

Starting at NHCC, did you ever think you’d be going to Yale and doing research along the way?

When I started at North Hennepin, I didn't know that I'd been doing what I’m doing right now. I actually wasn't even trying to be a scientist. What does Data Scientist even mean? I didn't know at that point what it meant. My thoughts about what science was, and my thoughts about what science is now, has evolved. The reality is, I didn't know about my career options at the beginning of college, and I wasn't even trying to go to Yale. I was just trying to enjoy science. I repeated the things that I enjoyed and whatever classes I didn't like, I just tried my best and never did it again. That's how I got from my starting point, to where I am now. I took every opportunity I could to try to learn something new.