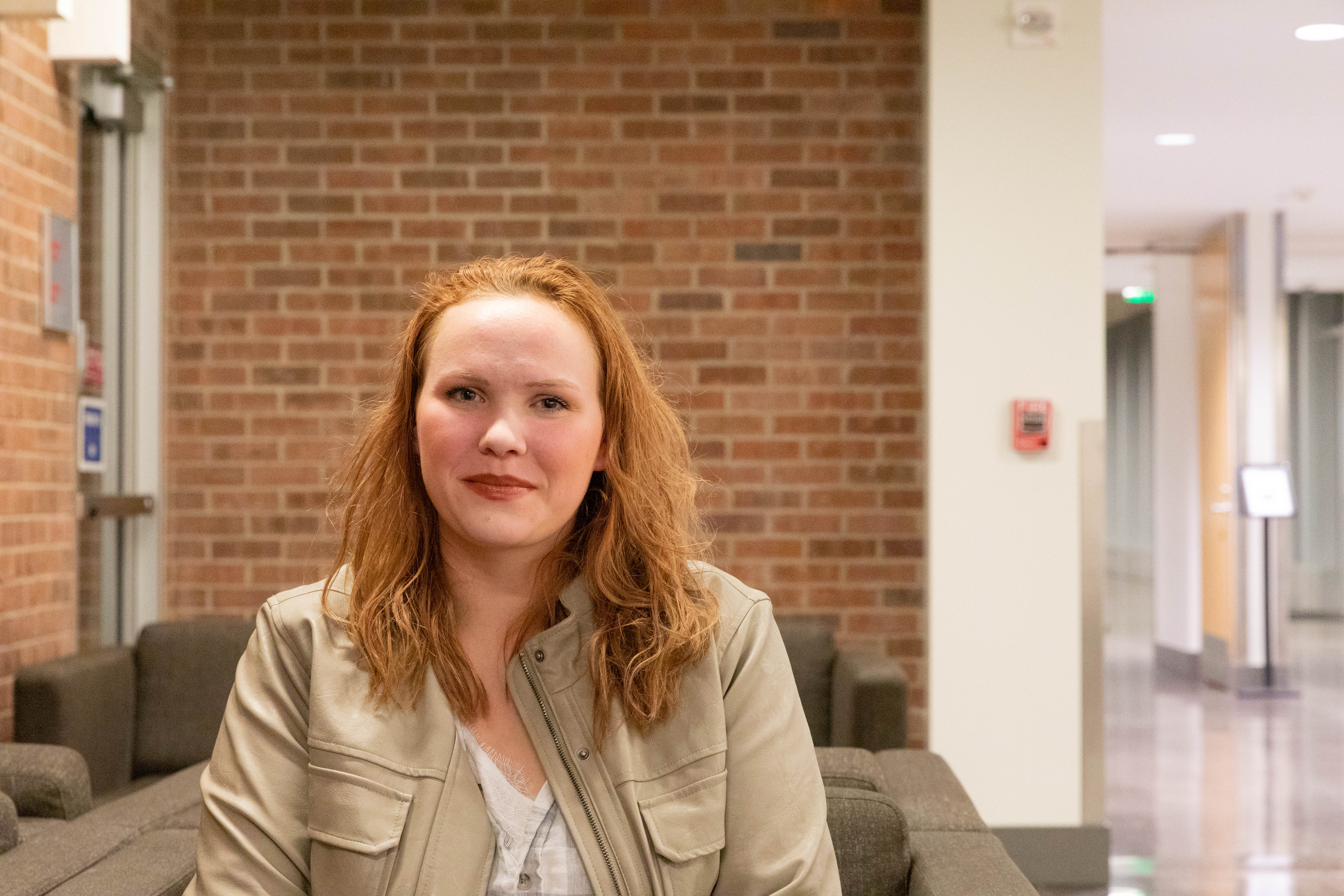 Phaedra Goff studies psychology at NHCC. She finds psychology interesting on a personal and an academic level. Phaedra is overjoyed to be a scholarship recipient and hopes to highlight the importance of mental health education. She believes, “The place where mental health doesn't get addressed, is the place where mental health isn't acknowledged.” After graduating from NHCC, Phaedra would like to continue studying at Capella University and later become a Clinical Counsellor. On receiving this scholarship, Phaedra noted, “I was really impressed that I won based off of my writing and I’m proud that I took the time to apply.” Get to know Phaedra more in the Q&A below!

What are you studying at NHCC?

I'm studying psychology and I should be graduating in May.

Do you think you want to continue studying psychology after NHCC?

Yes, I'm going to go to Capella University to finish my bachelor's and master's degrees in psychology. I want to be a clinical counsellor. Capella’s program is all online. I’ll get my master’s degree there too; they have a program where you can do your bachelor's and master’s at the same time. I thought to myself, ‘Hmm that doesn’t sound like a terrible idea,’ it's all online and looks cost effective, as much as college can be.

How has your NHCC experience been?

I’ve been going to NHCC for a few years now and recently I’ve been taking all my classes online. I prefer it this way, but that's just me. I have severe depression and back when I wasn’t doing very well, it helped me that I didn't have to get up and go to school. I could just work up the motivation to open my computer. I started at NHCC as a PSEO student, then I went to school for a while and then I took a year off to focus on my mental health and my finances. Then I came back to NHCC and started with one psychology class and then the next semester I took a couple more from there.

What was it about the Racial & Social Justice Scholarship that made you want to apply for it?

I think, the name of it. I read it and at first I saw, ‘racial justice’ and then I read it again and noticed it said, ‘racial and social justice’ and I was like, ‘Wait, social justice, that's all me! I love social justice, it’s my jam! I love racial justice as well.’ What also appealed to me about this scholarship, was definitely the fact that I could highlight mental health and abuse awareness. Along with trauma, those are things I’m passionate about because I’ve experienced them. Abuse leaves a mark. It plays off of trauma and mental illness and they go around and around in a circle, and I wrote about that in my scholarship essay. From my understanding, the sooner we pay attention to abuse, the sooner we stop the abuse and the sooner we stop the trauma and I want to pass that information on to others. The interconnection between those three things is what I want to further study in school. I feel like we haven't even started asking the right questions about these subjects and I want to get to the point where we are asking the right questions. But all in all, my life experiences and psychology background tied perfectly into this scholarship.

How does it feel to be so close to graduation? You are almost done!

Yes! It's weird, back when I was dealing with severe depression, I didn't even think I would be able to graduate, or, you know, have a life past a certain point. The fact that I'm coming up on graduation and I’ve been able to do this is this pretty mind blowing for me.

Congratulations, that is awesome! The world really needs more psychologists.

Yes, I agree. Hence why my focus and what I want to do in life is geared towards psychology. Mental illness is one of those things that when left undiagnosed and untreated, it can be really damaging to relationships. Then, sometimes that damage can lead to people having trauma from those relationships. Witnessing unhealthy behaviors can, at times turn out to be symptoms of undiagnosed mental illness. But, if they do get addressed early on and attention is paid to these behaviors, by either loved ones, or self-monitoring, that is a better path to be on. That way, mental illnesses and unhealthy behaviors can be easier to prevent.

Probably that I get less frustrated with people when I know their story, and when I know what's behind their reactions. By learning what’s really behind reactions and why people respond in certain ways, that’s how relationships can be strengthened. NHCC has provided me with psychology courses to take and everything I need to be able to get my degree.

Did you always know you wanted to study psychology?

I think, I slowly just developed into it. When I was in high school, I was looking between music and psychology. At the time, I was like, ‘Oh, music! I'll be a musician, I'll just play music all day long, nonstop forever and ever.’ I still play music and it's great, but then, after high school, I started thinking more seriously about stuff. The more I learned about psychology, the more I got interested in it. When I got to NHCC, I flipped between psychology and biology. I got really excited for a minute, thinking I should be a doctor. (I watched a lot of Grey's Anatomy) and then I was like, ‘Wait, no that's not me.’ I don't like the science part of it as much as I like the psychology part and the people part of it. So, I circled back around to psychology and eventually made it my major.

What do you think people should know about mental health?

Everything! But a more realistic answer is, as much as they can, and as much as they can afford to go out and look for. The place where mental health doesn't get addressed, is the place where mental health isn't acknowledged. Also, the place where it doesn't get addressed properly is when it's only half acknowledged. For example, you have a doctor on file for treatment, but the people around you aren't willing to understand what's actually happening inside your mind. It really helps when loved ones accept and acknowledge what you’re going through. If you know someone who is struggling with their mental health, try to help as much as possible, especially for the people you're close to. Even if you know someone who has a mental health illness, chances are you probably don't know how it affects them. You probably don't know how much their illness impacts their reactions and the words they say to you. Until you know why they do the things they do, you're not going to know who they are. Just talk to each other, find out what they’re going through and figure out what's helpful for each other. There are so many mental health conditions, like PTSD, or borderline personality disorder, for example and people might not know too much about those. When I’m feeling confused about what someone is going through and our interactions, I ask them, ‘Does this bother you? Is there anything I can do to help in this moment? Is it helpful when I say this? How can I help you right now?’ Sometimes, if you ask a person, “How are you doing?” They will just say ‘Fine’ to end the conversation or avoid talking about their issues. Instead of asking, ‘How are you?’ I’ve found that it is better to ask, ‘What’s happening right now?’ Or ‘Why are you so upset?’

Were you surprised when you found out you were a recipient for the scholarship?

Yeah, it was another one of those things that I never thought I could do. Because there was a time, I reached a point where I was really depressed, and I didn’t think I would be able to accomplish all of these things that I wanted to do. But then I saw the email and it said anyone can apply for this scholarship and a lot of people end of getting them. Please apply, so we can give you money. I didn’t think I would actually be the one receiving the scholarship!

What was the moment like when you found out?

I opened the email, and I got so giddy, I had to read it a couple times. It said, you've won this much for the racial and social justice scholarship, and I remember the essay I had written for that one and I was actually really impressed that I won something based off my writing. I was proud of myself for what I wrote about, and also really impressed with myself for taking the time and putting in the effort to do it. I got to see the outcome and it was really rewarding for sure.

What does this scholarship mean to you as a whole?

It means a lot of things. It means scholarships are for real people too and not just crazy smart, get all A’s and a 4.0 people. It is great to know that I’m capable of doing things like, receiving a scholarship, finishing my degree, moving on to my next degree. It meant a lot in terms of finance, to be able to have money that went towards my education. It made a world of difference in my finances and being able to pay for college. A huge difference.

Do you have anything else you want to say about your experience, or the scholarship?

All I can do is preach mental health awareness, that's all I got. Understand person first language actually does make a difference, even though at first it sounds annoying, but it is important. Instead of saying, ‘I'm bipolar’ you can say, ‘I have bipolar disorder.’ That helps to separate it from the person, so it doesn't become their identity. So many of us are fed shame for our entire lives, and we're just trained to do that, but it’s actually one thing that creates anxiety. When you feed a child shame from 0 to 18 for being the way they are, it is no wonder they develop anxiety somewhere along the way. Their nervous system has been trained to have an alarm go off, every time anything happens, because they were shamed and screamed at for every single thing they did. It seems weird to think of childhood like that, but it does have an effect later on.