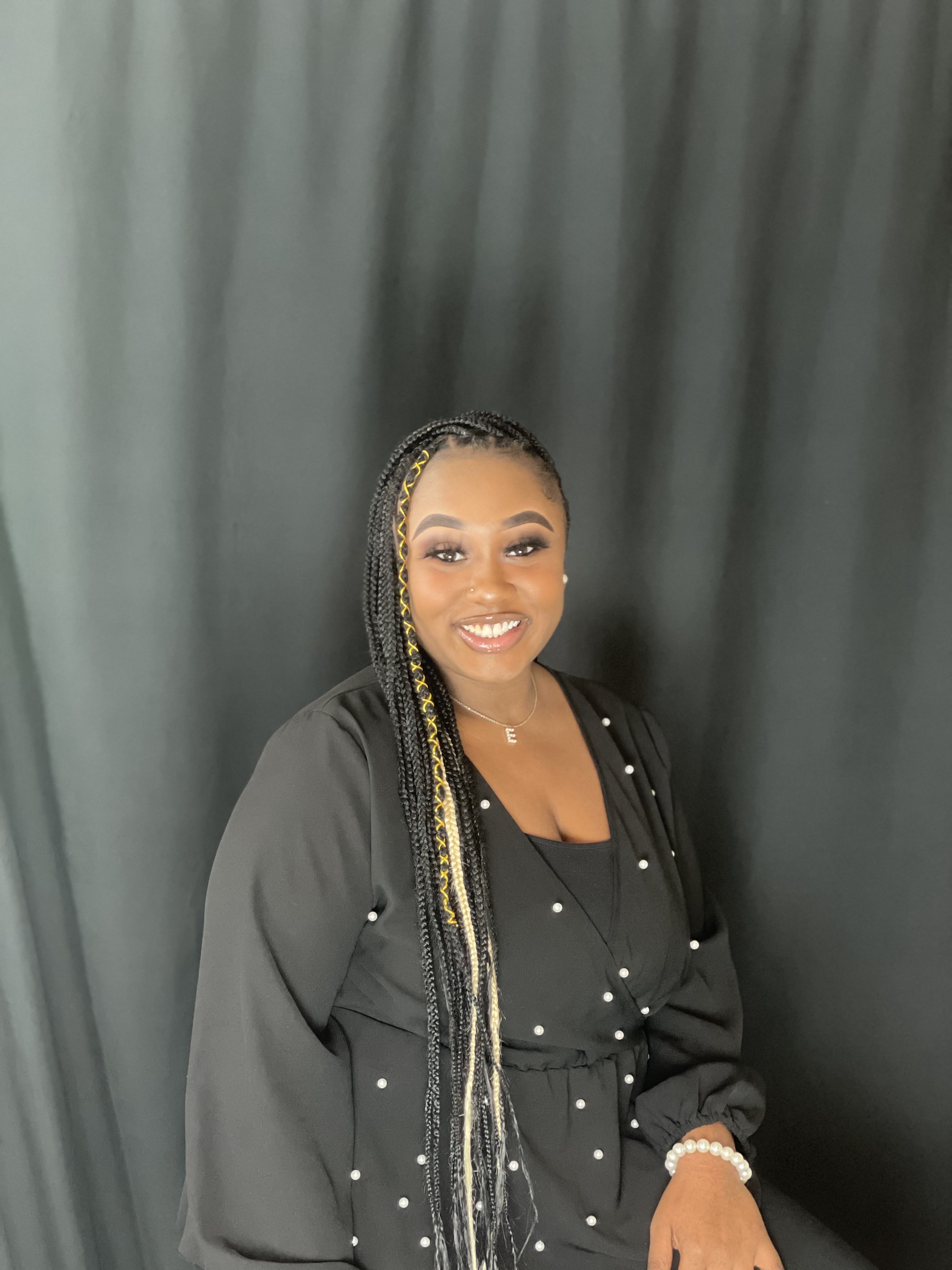 Eboni Davis started at Anoka Ramsey, straight out of high school, in the summer of 2018. Though her end goal was unknown, she focused on getting her generals done right off the bat. During those two years Eboni met with her advisor many times. The advisor suggested she look into the paralegal program at North Hennepin and after learning more about it, Eboni was sold. As soon as her credits were finished, she transferred over to NHCC in 2020. Today, Eboni Davis is about to graduate from NHCC with a paralegal degree and on top of that, she was chosen to represent her class as the 2022 Commencement Speaker.

“I went to a lot of career fairs and took a lot of those aptitude quizzes that help you to figure out what you want to do. I was trying to dial down and find out what I really wanted to focus on.”

In May of 2022 are you graduating from NHCC with a paralegal degree?

Oh, yes. I would say, my all-time favorite NHCC professor is Shawn Woodbury. I literally have his number and I text him about everything. When I first got the email saying that I was chosen to be the commencement speaker, I remember I sent Shawn a screenshot of the email and he immediately called me on FaceTime. He said, “This is amazing! You’re going to be the commencement speaker! That’s huge!”

What do you like the most about Shawn as a professor?

Along with teaching, Shawn is also a basketball coach. I’ve played basketball my whole life and I liked having that in common with him. If I didn’t understand something in school, or if I needed a little push, he’d try to give it to me in basketball terms. Shawn has a coach mentality and I felt like I needed that sometimes. He's one of those professors that looks at it way further than just being his job. I'm really grateful for that.

As a student, why did you feel you needed to have that push?

Well, I had a 3.8 GPA all throughout high school. Then going to Anoka Ramsey, I still carried my GPA over, but I kind of felt like I was going to school with no purpose. I didn't really know what I was doing, so I felt like I was wasting my time. When I finally got to North Hennepin and started the paralegal program, I met Shawn and he told me all the benefits about the program. That gave me some insight on what my life could be like for real. Once I finally committed to it and I showed Shawn what kind of student I was, I think he kept tabs on me more and wanted to make sure I continued on and felt supported. I'm really grateful for him, because during school I went through a lot mentally. But to have somebody in the outside world be concerned about you as a student and want to push you to do better, that made all the difference for me.

Do you see yourself in the future most likely working in a paralegal field, or in a business field?

Well, I’m working as a paralegal right now. I'm definitely going to stick with that for a while. I don't think I want to be an attorney, but I might want to get a business degree, to see if I can be more versatile and useful at a different law firm in the future.

Would you ever have guessed 5 years ago that you would be getting a paralegal degree?

Not at all! I first started out thinking I wanted to be an English major, but I didn't want to be a teacher, and I didn't want to write a book. I said, ‘There has to be something else!’ At the start, I took a lot of sociology classes, too. For a little bit, I thought I wanted to be a therapist, but then I decided, that wasn’t really where my heart was. After a long search, I finally found the paralegal program.

Do you think it's good to try lots of different classes to figure out what you like?

I took way more electives than I needed to, but it did help me. I wish I would’ve tried to make up my mind a little bit more before I went out there and took all those different classes. But going off that, I’m glad I got tons of experience into NHCC’s different programs. I got to learn about sociology and take a couple chemistry classes, (I dropped those real quick, because I'm not going to be a nurse). Looking back I wish I wouldn’t have dillydallied so much while figuring it out.

What were the differences between Anoka Ramsey and NHCC?

The difference I would say is, at first, I did feel more comfortable at Anoka. I loved my old advisor, because we really got to know each other in those 2 years. Then, after that, I feel like Anoka Ramsey didn’t really fit where I felt like I was going. I felt like that was just a place for me to do my generals, but at NHCC I found a future in my career.

Where do you work as a paralegal?

I work at Heuer Fischer, a personal injury law firm in downtown Minneapolis. This is my first ever real legal job and I really like it. I get to learn firsthand from a bunch of different attorneys. It took me a minute to get my hands dirty and get used to everything, (I got lost in the skyways at first), but I got it down now! I'm in motion and I have things under control now.

What would your dream job be?

Besides my current job, this is really random, but I always wanted to move to LA and work as an interior designer. I figured I could do that at night and during the day work as a paralegal. But these days that dream is long gone now.

The reason I said I wouldn’t want to be an attorney, is because, in my opinion they don’t have time to focus on their lives. They are on the phone and on the clock close to 24 hours a day. Rather than being a paralegal, where I clock in at a certain time and I clock out at a certain time. I like that, because I don't want to burn myself out and work nonstop. That’s why I’m not leaning towards becoming an attorney. Plus, even working as a paralegal can be a bit stressful at times and attorneys have even more stress than that. So, that wouldn’t be an ideal work situation for me.

Do you have any advice for prospective NHCC students?

I would say, utilize the professors and staff at NHCC and utilize them to the extreme. You get out what you put into it, and I realized that towards the end of my time at NHCC. If you utilize everything that you have in front of you, it will work to your advantage. You don't just come out with a degree. For me, I didn't really picture myself as a paralegal before graduation. But I found my current job through a classmate that I met at North Hennepin. Make sure you utilize everything in front of you before it's gone.

Do you feel students coming to college from high school today have a lot of barriers to overcome?

I think, for my generation everybody's trying to look for money. They're trying to create their own businesses and avoid the regular 9 to 5. I don’t think it's bad to have a 9 to 5, and still pursue school, if that's what you want to do. Everybody wants fast money but that's only going to be there for a certain amount of time. I'd rather put in the work now, so that 20 years later on I'm not behind and just getting started in school now. You’ll be glad later that you have it already done. But it took me a while to figure that out as well. I took off a semester last year and I started my own business and got my lash technician license. Then I realized, ‘Okay, this is what people are doing now, because they're getting paid right now.’ I didn’t want to have to go to school when I'm in my 40’s or 50’s. For a while I tried cosmetology. In the back of my head, I just really wanted to finish what I had started here; I knew I was so close to finishing. I reminded myself that I wanted to do this, and cosmetology would always be there after I graduated too.

I only had one class on campus, and it was probably one of the first classes I had. It was with Carrie and was in the hallway looking for her classroom. I had gotten to campus 30 minutes early, and I asked everybody I could find in the hall for directions. I just couldn’t find my classroom, but this story is still my favorite, because instead of finding the classroom I found the cafeteria and the theatre/auditorium. I found so many different things except what I was looking for! It was so funny to me, because this wasn’t my first time on a college campus or anything. I already went to Anoka Ramsey! I never thought I would get lost at school again. I thought I had it down, and I definitely did not! It must’ve been a good hour to an hour and thirty minutes before I found my classroom. I’ll never forget that!